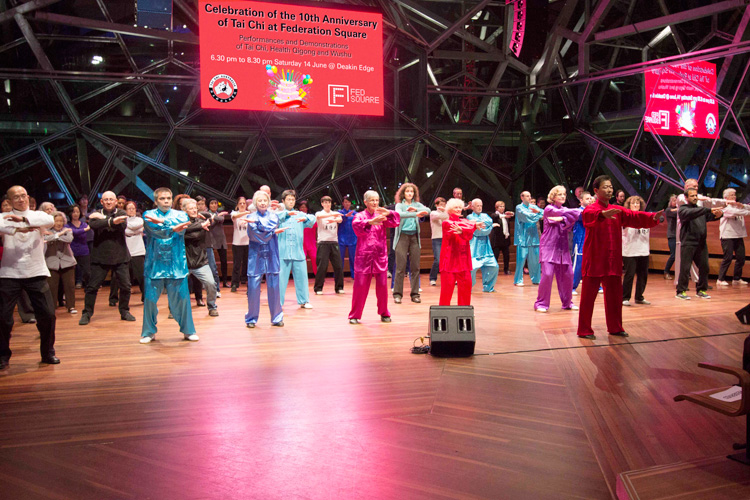 Celebrated with a spectacular exhibition of Tai Chi, Health Qigong and Wushu to a packed audience at the Deakin Edge at Federation Square in Melbourne. Everybody present was treated to an amazing experience.

It was a TCA family affair with Chief Instructor, Master Song at its head and South Yarra student, Ken Paynter as MC. Instructors, local Wushu Masters, students, members from the audience and two visiting Professors from China gave performances and demonstrations of Tai Chi Barehand and Weaponry forms, dynamic Barehand and Weaponry techniques of the Chinese Martial Art, Wushu and Health Qigong. To make it a truly Chinese cultural experience, live music by three musicians was played throughout led by esteemed Professor Shen Pan Geng who played the Er Hu, a Chinese two stringed fiddle.

Chief Instructor Master Song gave an inspired history of TCA’s time at Federation Square through the eyes of two Chinese boys: how the venue has become an important part of the school; how Tai Chi and Health Qigong has become an important part of Federation Square. He thanked Chris Brooks for the opportunity of growing Chinese Cultural understanding as well.

The evening began with Master Song leading everyone including members of the audience in Tai Chi fundamentals. This set the scene for a varied programme ranging from basic to advanced forms demonstrated by groups of TCA students and Instructors to individual performances. Barehand and Weaponry forms included 32 Sword, Walking Stick, Tai Chi Fan, Shaolin Pole, Don Yue Staff and Broad Sword.

During the evening Josie Zwicky , a visitor from Sweden spoke of her joy of finding Tai Chi at Federation Square. Whenever she visits Melbourne she participates. Boronia student, Bernadette discussed how Tai Chi and Health Qigong had benefited her general health and well-being during her recovery from heart problems. Both talks were warmly received.

The evening closed with Master Song, leading a crowded stage of eager participants in the Lotus, which relaxes the body and calms mind. The applause was deafening.

Congratulations Master Song. The night was a well over-due success and ensures the partnership between TCA and Federation Square continues and grows.‍