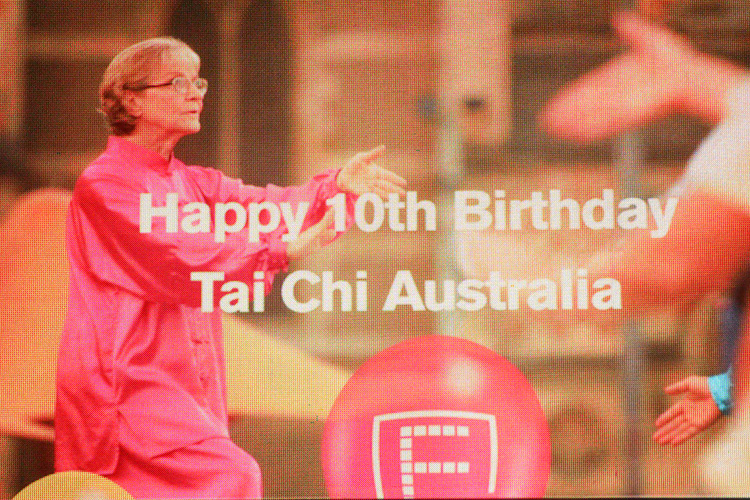 Chief Instructor, Master Han Jin Song lead a special Tai Chi class to a slowed down version of Happy Birthday before joining Chairwoman of Federation Square, Catherine Walter AM to blow out the candles on the cake and to cut it with a ceremonial sword.

Classes began at 8am with Tai Chi exercises. Catherine Walter AM thanked TCA and Chief Instructor, Master Song for supporting Federation Square for ten years and the visiting Professors for coming.

Chief Instructor, Master Song thanked Federation Square for giving TCA the opportunity to share Chinese culture and the benefits Tai Chi and Health Qigong offer. He also thanked the participants particularly, the regulars and those visitors to Melbourne who join TCA each time they visit. Federation Square has become the meeting place for those wishing to practice Tai Chi and Health Qigong in the city.

Every week for ten years TCA has conducted Tai Chi lessons on Tuesdays and for the past three years Health Qigong on Fridays. From small beginnings the number of people practicing Tai Chi and Health Qigong has grown as they accept the health benefits achieved from regular practice particularly in relation to work related mental stress.

In April 2013, Safe Work Australia released its first report on work-related mental stress. It found that the loss of productivity and absence of workers is costing Australian businesses more than $10billion per year and that professionals make claims for mental stress more than any other occupation with one third due to work pressure.

The entire event was broadcast on the Federation Square Big Screen.

TCA invites all Melbournians and visitors to the city regardless of age or level of fitness to join Tai Chi and Health Qigong classes free of charge.